Home
What does acupuncture treat?

What is traditional Chinese acupuncture all about?

Every year 2.3 million acupuncture treatments are carried out by British Acupuncture Council members. Acupuncture is now widely accepted as an effective solution for a range of illnesses and symptoms, and what’s more, there is a substantial body of evidence to support this.

Acupuncture is part of a system of medicine that has been practised in China for over 5000 years. The practise of acupuncture is thought to have begun with the discovery that stimulating specific areas on the skin affects the function of certain organs in the body.

Traditional Chinese Acupuncture focuses on the balanced function of the body’s motivating energy (Qi). Qi flows throughout the body in channels called meridians along which the acupuncture points lie. There are over 600 points on the main meridians and many more are located elsewhere on the body including on the ears.

One of the most popular myths surrounding acupuncture is the size of the needle used in treatment.  Research shows that 21 per cent of the British public thinks an acupuncturist’s needle is as large as the needle used for an injection. In reality, acupuncture needles are actually the same width as a human hair and some are just 0.13mm in length.

Most people might feel a slight tingling sensation as the acupuncture needle is inserted, but certainly nothing like the pain associated with an injection.

Piercing the skin stimulates the acupuncture point and the body’s Qi. This in turn brings about a movement in the energy, harmonising the balance and restoring health.

Western and Chinese Medicine are fundamentally different, in that Western Medicine will only look at the symptoms in isolation whereas in Chinese Medicine the person will seen as a whole,  taking into account life-style, physical and emotional traits in order to build up a picture of the disharmony taking place in the patient. Health is a state of emotional, spiritual and physical balance.

In recent times much effort has gone into researching the benefits of acupuncture on our modern day lifestyles. Evidence is emerging that the Chinese over thousands of years indeed have developed a system of healthcare, which in many instances can be used to complement the Western disease based healthcare model. In some cases, where people are either reluctant to accept or unable to tolerate drug based treatment acupuncture may provide an alternative. This is always done in consultation with your GP or hospital doctor.

Despite popular opinion, acupuncturists have degree-level qualifications and adhere to codes of safe practice and professional 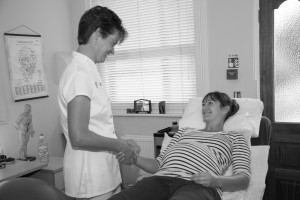 Claims that acupuncture is unsafe are much discussed in the media, yet there is a growing body of research which backs the treatment’s safety.

Two surveys conducted independently of each other and published in the British Medical Journal in 2001 concluded that the risk of a serious adverse reaction to acupuncture is less than 1 in 10,000.

This makes acupuncture one of the safest treatments available. There are very few side effects from acupuncture given by a fully qualified practitioner of traditional acupuncture. Any minor side effects that do occur, such as dizziness or bruising around needle points, are mild and self-correcting.

A comprehensive list of the conditions, which can be relieved can be found here.

Home
What does acupuncture treat? 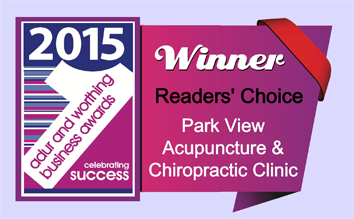 No obligation to book further visits.
See the clinic, meet the practitioner
and get some advice.
Book now 019032 30066

HOW TO FIND US

Get £ 10 off your initial Consultation by sigining up to our newsletter here. 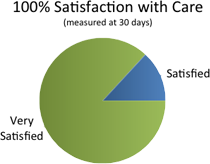 Samantha Drown BSc (Hons) Sports Therapy Samantha is a qualified Sports Therapist graduating from the University of Chichester. Samantha has two years experience providing pitch side assistance for the Universitiy’s Rugby team and is currently interning...

Park View Acupuncture & Chiropractic Clinic started from humble beginnings in 1996 with husband Jan and wife Sarah, chiropractor and acupuncturist respectively. Since then they have grown the business to be an established and...

We are proud to announce our sponsorship of local professional golfer, Peter Tarver-Jones

We are immensely proud that the public in Adur and Worthing voted for us as the best Worthing Business.